Urban Farms Are Stepping Up Their Roles in Communities Nationwide

At a tiny farm on a busy corner in Birmingham, Alabama, an older woman, just off work, stopped to speak with farmers Chris Gooden and Maria Dominique Villanueva. She quietly told them that she was out of food, but felt too ashamed to go to the food bank. After reassuring her, they loaded the visitor up with vegetables from the farm, along with donated bread and bananas.

This, Villanueva said, is why they do this work, because people should not have to feel embarrassed when they need food. Their farm, Fountain Heights Farms, has become an oasis that feeds not only Gooden and Villanueva’s family of five, but the larger community as well. Made up of three adjacent vacant lots, and once an eyesore that included a burned-out house, this spot is one of many urban farms that have popped up around the country over the past decade. Like Fountain Heights Farms, many of these small operations have set out to offer fresh, healthy food in underserved neighborhoods.

By all appearances, it seems that there are a growing number of urban farms, from market gardens in once-vacant lots to rooftop farms, sprouting amidst concrete cityscapes. However, quantifying this apparent growth is another thing entirely: In fact, it’s unclear how many farms exist within U.S. cities. Although the U.S. Department of Agriculture (USDA) counts farms every five years through its Census of Agriculture, it does not distinguish between rural and urban operations.

The USDA has been reluctant to count urban farms, or even define the term urban farming, but it is building an infrastructure to support urban growers. The agency launched an Office of Urban Agriculture and Innovative Production and started a related grant program due to provisions in the 2018 Farm Bill. In 2021, the agency also launched a Federal Advisory Committee for Urban Agriculture and is now in the process of organizing elected committees to support farmers in 17 urban counties.

As federal resources have begun to make their way to urban farmers, I set out to document the role that urban farms are playing in communities across the U.S. This year, I have taken a series of road trips to visit innovative farms around the country—travels which have thus far taken me to 21 farms in 11 cities.

As I’ve chatted with farmers and walked through their fields, three themes have emerged. First, many, if not most, urban farms operate as nonprofit organizations, often on a shoestring budget, led by farmers who are powerfully committed to their communities. Second, urban farmers are deeply involved with provisioning food-insecure communities—and most have made significant pivots to offer free and low-cost food during the COVID-19 pandemic. And third, urban farms promote community building that goes far beyond feeding people. They have offered a place to gather and be in the company of others during what has often been a lonely, isolating time, as well as a spark of hope for the future. The farms below illustrate these themes in three very different cities.

When Gooden and Villanueva moved into their home in the historic neighborhood of Fountain Heights in 2017, they decided to save money by planting a garden, which was unexpectedly bounteous. They had no idea that their garden was about to take over their lives, just as it was taking over their yard.

Fountain Heights was once a burgeoning middle-class Black community in this former industrial city of 200,000, where Jim Crow and the battles of the Civil Rights era are living memory for many residents. Interstate I-65 cut Fountain Heights in half in 1971, and up to a third of the population left the fragmented community. Even today, many homes are abandoned, and the neighborhood has suffered for decades from a lack of investment and basic services. 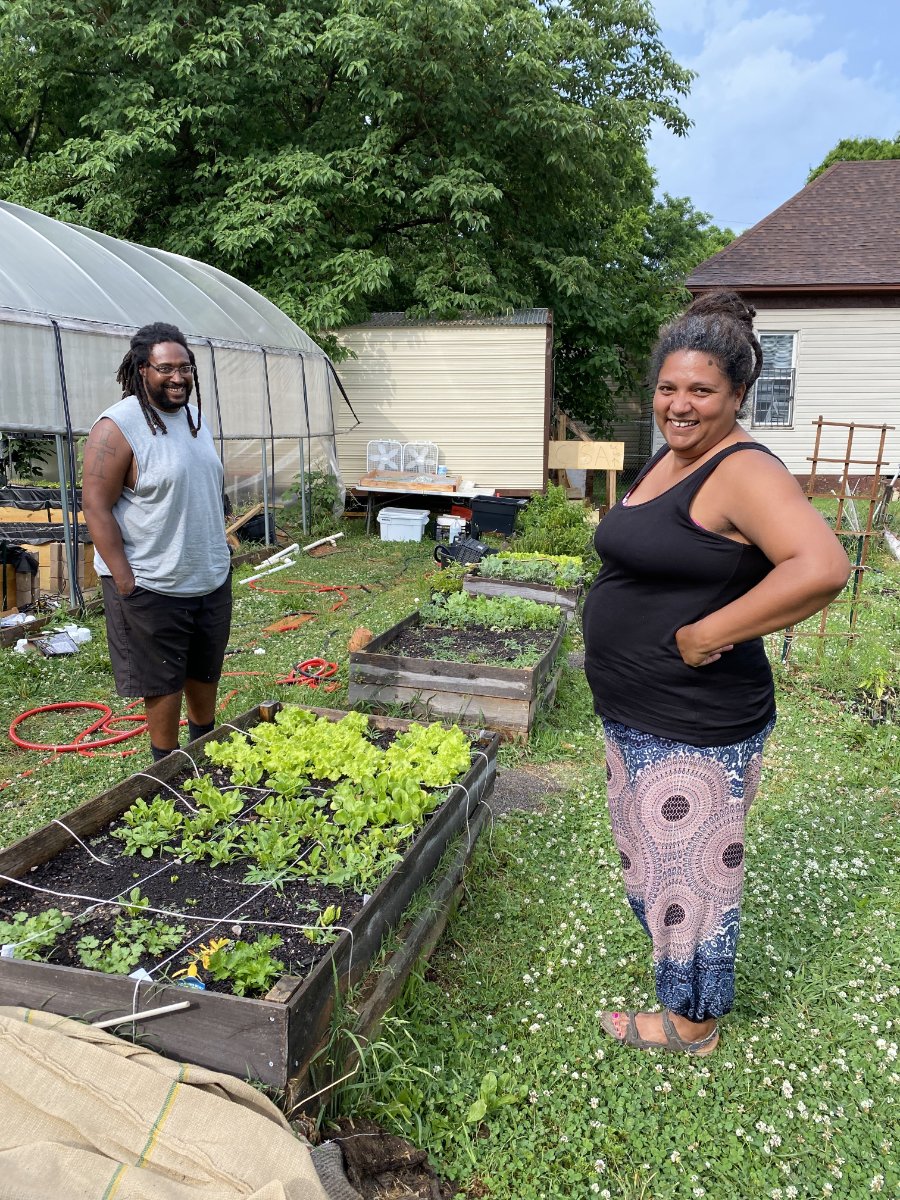 “Every time we planted our front yard, we’d have enough to give away,” said Gooden. “And then she came up with this idea,” he said, nodding to Villanueva. “Why don’t we grow more, a lot more? Because there’s a need here. There’s no close by grocery stores or anything like that.”

A corner store across the street is the lone market within walking distance, and it makes most of its income on beer, wine, phone cards, and an ATM. The store’s limited selection of food includes potatoes, onions, and $7 loaves of bread.

By 2018, Gooden and Villanueva were growing food in the vacant lots next door, determined to offer healthy, affordable, fresh produce in their community. Fountain Heights Farms snowballed from there. Over time, they added a greenhouse, an aquaponics system, a washing station, and a packing shed. They sold some of what they grew, and gave the rest away to neighbors.

By spring 2020, as the harsh reality of the pandemic lockdown set it, they were already a trusted provider of food in their community, which needed them more than ever. They implemented a sliding scale CSA, where customers pay what they can for a weekly box of fruits and vegetables. Even so, many couldn’t pay, and Gooden and Villanueva donated much of their harvest, which spills unfenced to the edges of the sidewalk.

This lack of fencing is a rarity on urban farms, since even those farmers focused on offering affordable food usually want to control access to their crops. Gooden and Villanueva, however, never wanted a barrier between what they grew and their neighbors. “There was never a question of us putting up a fence,” said Villanueva. “We give the food away. It doesn’t make any sense to fence it off.”

How to Grow Microgreens from Start to Finish (COMPLETE GUIDE)