Regenerative agriculture can help save water; here is how

Use of natural inputs, minimum-till, mulching, multi-cropping and sowing of diverse and native varieties can increase the soil’s water-holding capacity

The Green Revolution of the 1960s pulled India from the brink of starvation, transformed the country’s ability to feed itself and turned it into a big food exporter. But the revolution also made India the world’s biggest extractor of groundwater.

According to the UN’s World Water Development Report, 2022, the country extracts 251 cubic km or more than a quarter of the world’s groundwater withdrawal each year; 90 per cent of this water is used for agriculture.

The gains are also tailing off; a 2019 study by the Indian Institute of Technology, Delhi, shows that over 39 million hectares (ha) of area in the country under wheat, rice and maize has not shown improvement in the past decade.

If agriculture is to continue to feed the country’s undernourished population — 224.5 million, according to the UN’s State of Food Security and Nutrition in the World, 2022 — and drive its economy, it needs to work in harmony with nature, not against it.

Farmers, activists and agricultural research organisations across the world are thus developing methods of chemical-less farming which uses natural inputs and cultivation practices such as crop rotation and diversification, which fall under the wider umbrella of regenerative agriculture.

This farming practice goes a step ahead of sustainable agriculture and aspires not only to maintain the resources like soil and water but also to improve them.

The key to improving water use and efficiency is enhancing the health and nutrient-holding capacity of the soil. Studies have established that one per cent increase in soil organic matter (an indicator of soil health) per 0.4 ha increases water storage potential by more than 75,000 litres.

In India, the Union government is promoting regenerative agriculture with an aim to reduce application of chemical fertilisers and pesticides and to lower input costs. States like Uttarakhand, Himachal Pradesh, Andhra Pradesh, Sikkim and Gujarat too have introduced schemes to promote it.

But can this approach also help alleviate the country’s water crisis, given that India’s soil health is highly degraded? A 2022 report by Delhi-based think tank Centre for Science and Environment (CSE), State of Bio Fertilizers and Organic Fertilizers in India, shows severe and widespread deficiency of organic carbon and micronutrients in Indian soils.

Regenerative agricultural practices include use of natural inputs, minimum-till, mulching, multi-cropping and sowing of diverse and native varieties. In principle, natural inputs help improve soil structure and its organic carbon content, while planting water-guzzling and water-efficient crops together or in alternating cycles reduces the frequency and intensity of irrigation. They conserve energy used by irrigation aids such as pumps.

ICAR-IARI and other agricultural institutes have conducted multiple studies to show that these and other practices often followed by organic farmers like systematic rice intensification — a method in which seeds are spaced at wider distances and organic manure is applied to improve yields — changing crop system patterns, leaving residue on the field and micro-irrigation lead to better water conservation.

However, so far, there have been no structured studies on the water-saving potential of regenerative agriculture. The National Project on Organic Farming is the country’s longest experiment on the practice, ongoing since 2004 and conducted by ICAR-Indian Institute of Farming System Research, Meerut.

Even this does not measure water efficiency. The Central Arid Zone Research Institute, Jodhpur, has recently begun a study on this subject, said Arun Sharma, scientist, organic farming at the institution, but data will not be available for three or four years.

Evidence on the field

On the ground level, there have been some analyses which reaffirm the links among regenerative agriculture, soil health and water saving. Kheti Virasat Mission, a civil society organisation that works in Punjab, conducted in 2021-22 a survey of more than 350 organic farmers in the state.

Of the surveyed farmers, 93.6 per cent claim that the rainwater-holding capacity of their land increased compared to chemical-based farming. Organic farming reduced the irrigation requirements by 30-60 per cent in most cases.

Rythu Sadhikara Samstha, a non-profit set up by the Andhra Pradesh government to promote natural farming, conducted two studies in 2020 in the state —one on water consumption and the other on energy consumption — comparing results of zero-budget natural farming against chemical farming.

Samaj Pragati Sahyog, a grassroots organisation in Madhya Pradesh that promotes natural methods to control agricultural pests such as composting and recycling of crop residues, use of farm yard manure, cattle urine and application of tank silt, has also made efforts to this end.

It has conducted field trials with 1,000 farmers on more than 2,000 ha of land in four districts of Madhya Pradesh and one district of Maharashtra in 2016-18, to measure the water saved.

Its results, published in its annual report for 2018-19, show a total of almost 15 billion litres of water, by employing sustainable agriculture practices like changing crop systems, soil fertility interventions and micro-irrigation technologies. 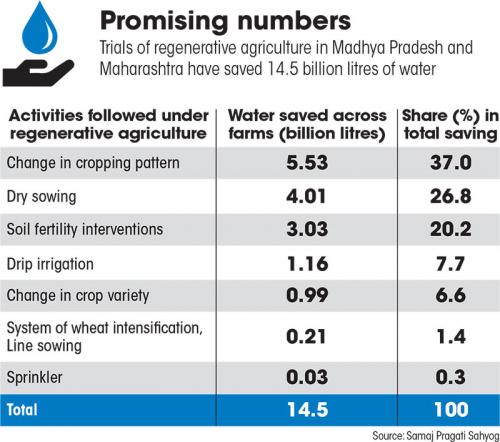 To put these numbers in perspective, as per the Union Ministry of Housing and Urban Affairs, the benchmark for urban and rural water supply is 135 litres and 55 litres per capita per day, respectively.

CSE also spoke to the farmers who were part of the trial. Mangilal Rathore, a farmer in Udainagar village, Dewas district, Madhya Pradesh, said, “Earlier we used to run our pump for four hours to flood-irrigate our land, now we run it for one hour. Also, the number of times irrigation is done has reduced for most of the crops.”

Yashoda Bai from Dad village, Dhar district, added, “We do not need to water our field before sowing. We take up rabi crops, which we did not earlier.”

This evidence, although compelling, needs to be backed by scientific studies. ICAR-IARI’s Kumar explained that there are multiple ways to calculate how much water is saved.

“For scientific studies the simplest method is by preparing three-four agricultural plots and irrigating them at different depths. The frequency of irrigation is determined on the basis of the evapotranspiration (transference of water from soil and plants to the atmosphere) of the crop. At the end of the crop cycle, water efficiency is calculated by dividing yield from plots by evapotranspiration. As we know which plot has been given how many units of water, we can calculate how much water is saved.”

Civil society organisations and farmers do not have the capacity to conduct long-term studies.

“Scientific bodies are best equipped to do such trials and calculations,” said Dinesh Balam, associate director of Watershed Support Services and Activities Network (WASSAN), a Hyderabad-based non-profit that works to conserve ecological resources. Such research will go a long way in promoting regenerative agriculture.

This was first published in the 16-30 November, 2022 edition of Down To Earth

We are a voice to you; you have been a support to us. Together we build journalism that is independent, credible and fearless. You can further help us by making a donation. This will mean a lot for our ability to bring you news, perspectives and analysis from the ground so that we can make change together.