In its first semester, Colorado State University’s new Master of Agribusiness & Food Innovation Management program is drawing in professionals from a variety of backgrounds but with a common interest in solving food system challenges in new and collaborative ways.

Students embark on a combination of coursework, networking opportunities and on-the-job experience working with innovators in agriculture and the food and beverage industries. The program includes a practicum where students help develop and launch new products and businesses, along with advancing technologies.

But while the program’s focus is on agriculture and food, the students it attracts are from a diverse array of fields.

“We’re intentionally open to students from a wide variety of backgrounds because truly creative and innovative work requires different perspectives,” said Gregory Graff, who is co-lead for the program, along with Gregory Perry. Both are professors in CSU’s Department of Agricultural and Resource Economics.

“We want a music major and an engineer and an agriculturalist to come together to think about new solutions,” Graff said. “Here they’ll learn how to work as a diverse team and bring those complementary skills to the forefront.”

There are two target audiences for this program. The first group includes students who have come up through the traditional route in agricultural science and are looking to layer on a business degree. Then there are the “foodies.”

“People who are from all over, but somehow they’ve gravitated into the food space,” Perry explained. “They may have started a restaurant. They may have a little organic farm growing crops for the farmer‘s market. They have something that’s caused them to migrate into the food space because that’s their love. That’s where they want to be.”

That includes students like Michael Barnhart, who earned his bachelor’s degree in Recording Arts and Music Technology. His first foray into entrepreneurship was opening the Denver nightclub Beauty Bar, which offered a unique combo of manicures and martinis.

When the club closed in 2017, Barnhart began working in hemp cultivation, eventually focusing on hemp’s multitude of uses not only in the food industry but also industrial applications. The move aligned well with his interest in sustainable food production.

“When I found this program, I thought it was a great opportunity to take my skills and past business ownership experience and hone them in on something more specific that has an opportunity to really grow,” Barnhart said. “Our food systems are changing. There’s a direct correlation between our planet’s health and human health. And in order to actually make an impact on human health, we need to have access to products that are being consciously produced with that ethos in mind. I would like to help those products and companies navigate the industry confidently.”

For fellow MAFIM student Sarah Rhodes, the program returns her to her agricultural roots.

Rhodes grew up working on her family’s cattle ranch but wanted to try something a little different when she came to CSU for her undergraduate degree. After receiving her bachelor’s degree from the College of Business in 2020, she went on to work at the college’s Institute for Entrepreneurship.

Handling marketing and events coordination in a pandemic gave her a unique perspective, allowing her to get creative and promote programs in more rural parts of the state. It also sparked an interest in getting back into agriculture.

Rhodes said she hopes to use the MAFIM program to help guide her next steps – whether that’s to open her own business or find a way to bring more innovation to rural communities.

“A lot of innovation is being done within cities and that’s great, but innovation can happen anywhere,” she said. “A lot of our food systems are built on the backs of rural communities, and I just don’t want innovation to leave that entire segment of our country behind.”

As a project manager for the United States Space Force, Craig Calhoun is used to juggling multiple tasks and having to find creative solutions fast. When Calhoun’s dog, a cane corso named Bella, was diagnosed with osteosarcoma, and began treatment at CSU’s James L. Voss Veterinary Teaching Hospital, he realized the ties to food and health stretched beyond what he put on his own dinner table. Eventually, Calhoun said, he hopes to start his own natural, raw dog food business.

The MAFIM program is helping him to gauge the feasibility of the idea and learn about the intricacies of the industry, not only through his professors and classmates, but from the industry innovators brought in to share their insights as well.

“I knew we were going to get to network, but I did not expect that we would meet so many people from so many different industries in agriculture and agribusiness,” Calhoun said.

Straight from the innovators

Networking is a critical component of the program, said Laston Charriez, assistant professor of practice and industry liaison. And if you’re looking to network in the food space, Denver is a perfect place to do it.

Throughout the semester, the students have met with a variety of innovators, from breweries looking to create the next niche style of beer to seafood manufacturers finding ways to operate out of landlocked Colorado to a plasma-harvesting company experimenting to find new medicines.

“We’ve really been able to tap into a myriad of industries,” Charriez said. “Because if these students are going to spend a year with one of these companies in their practicum, they need to really love what they’ll be working on.”

A major part of the program is the practicum in which students work directly with local innovators and companies on projects. Working in a cohort model, students gain real-world experience while determining the viability of a new business idea, taking it through development, and helping launch the business or product.

Each week a new business owner speaks to the class about their venture, from the learning curves they faced to their successes – and also their failures.

“You learn as much by killing your project as you do launching it,” Charriez said. “Even if they fail, they succeed.”

Students will be able to work with organizations and innovators like giants Leprino Foods and JBS, as well as small startups, like Big Apple Bodega, a Denver food truck that specializes in New York-style “chopped cheese.”

During a recent class, Big Apple Bodega owner Brian Murphy spoke to the students about the opportunities and challenges he’s had starting his business.

Aside from maintenance on the truck, Murphy told the class that one of his biggest hurdles – and opportunities – is that not a lot of people outside of New York are familiar with what “chopped cheese” is. The combination of ground beef, onions and spices, mixed with melted cheese and served on a hero roll is New York’s version of the Philly Cheese Steak, but it’s not as well-known as its Philadelphia counterpart.

It also doesn’t have as much competition, making it a perfect opportunity for expansion, said Murphy, who is looking to franchise his food truck concept.

“Denver is the second-best place in the country to own a food truck,” Murphy said. “Portland, Oregon, is number one.”

The right time and the right place

One of the biggest challenges industry-wide right now is getting enough of the right people into the space, Perry said. This program will work toward solving that problem.

“What we hear as we talk to the industry people is they can’t find people who have the backgrounds and the experience that they’re looking for to help them be successful,” Perry said. “So, they’re already eyeing these students.”

And since a company’s survival depends on its ability to innovate, the need for fresh ideas and people who are trained in the skill of innovation, who know how to take something from an idea to a fully realized product or process, is critical, Perry added.

Housed on CSU’s Spur campus, the program finds itself in the epicenter of innovation. 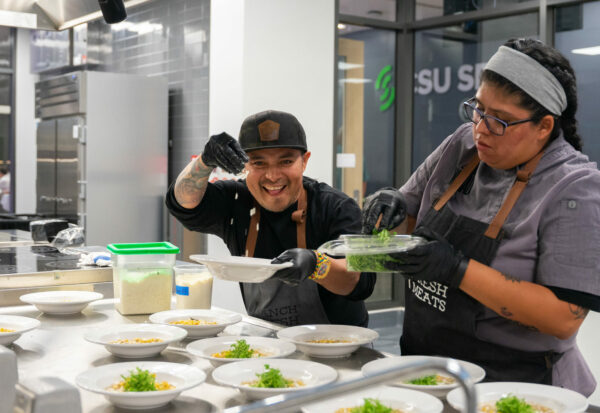 From its commercial kitchen to the soil testing lab to food safety labs, the Spur campus is ground zero for innovation in the agriculture and food innovation space, Graff said. That makes it a perfect pairing for the MAFIM program.

“Almost a decade ago, we wrote and released a report out of CSU that talked about the emergence of the agriculture and food innovation cluster on the Front Range and how ideally situated we were at that time,” Graff said. “And it has definitely borne itself out.”

Denver and Boulder were recently named one of the world’s top five “agtech and new food” ecosystems, according to a recent study from the Global Entrepreneurship Network.

When Charriez first stepped onto the Spur campus, he said he was stunned by its possibilities.

“When you combine Spur’s ability to bring urban farming, soil testing, plant diagnostics, the kitchens, the greenhouse, all of that in one place, to me that is magical,” he said.

To increase networking opportunities, the program has already collaborated on several events on the Spur campus, including a VIP event with the Hispanic Restaurant Association and a Top Chef-style competition.

“Spur really engenders a feeling that you want to be here and also inspires you to think about what else we can do,” Charriez said. “And the possibilities are endless.”

Show your support for Local Journalism by helping us do more of it. It’s a kind and simple gesture that will help us continue to bring stories like this to you.

Inside The Economic Survey 2023: Take A Look At Key…