England’s chief medical officer is to lead a new drive to reduce air pollution, with an emphasis on indoor and agricultural emissions that remain stubbornly high while pollutants as a whole have fallen.

Sir Chris Whitty said one target was air pollution in homes, workplaces and public buildings, which accounts for a growing proportion of people’s exposure to harmful chemicals.

Another was ammonia from farming, which Whitty said was the only major outdoor pollutant whose emissions have not declined significantly in recent decades.

“I will continue to push air pollution as an issue in government,” Whitty said as he launched the campaign on Thursday by devoting his 2022 annual report to air pollution.

“The overall tone is very optimistic,” he added. “Things have got a lot better in terms of air quality over the last 40 years [but] we can and should go further — and it is technically possible to do so.”

An estimated 26,000 to 38,000 deaths per year in England are caused by outdoor air pollution, according to the report, but there is no reliable figure for all illnesses it causes ranging from cancer to respiratory and cardiovascular disease. Nor is there a reliable estimate for how many people suffer ill health through indoor pollution.

“Eighty per cent or more of an average person’s day is spent indoors and indoor pollution is in relative terms becoming much more important as outdoor pollution improves,” Whitty said. “Yet we have much less knowledge about people’s exposure to indoor air pollution and a less well developed plan for reducing it.”

Solid fuels are by far the most polluting method of domestic heating, the report said. Yet wood burning in stoves and open fires has become more popular in recent years for “aesthetic as well as practical or economic reasons.”

Other indoor pollutants, such as volatile organic compounds and microplastic fibres, are even harder to assess, said Alastair Lewis, professor of atmospheric chemistry at the University of York and chair of the government’s air quality expert group.

“If you look across our homes and open up the cupboard under the stairs, we are using more chemicals overall than we were 20 or 30 years ago,” said Lewis, a co-author of the report. “But you can’t solve the problem by pointing to any individual source. It’s an overall trend.” 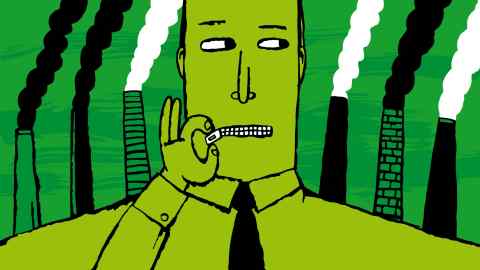 Ventilation can play a central role in reducing air pollution, Whitty pointed out, but letting in fresh air conflicts with keeping rooms warm, reducing heating bills and cutting carbon emissions. “It’s a critical engineering challenge, which has also emerged from the work done on Covid to improve ventilation.”

Outdoor air pollution is expected to continue declining overall, driven above all by the shift to electric vehicles from petrol and diesel powered cars and lorries. But the report identifies several areas in which action by government and individuals can accelerate the trend.

One is urban planning to encourage more walking and cycling. Despite a recent uptick, the number of kilometres travelled by bicycle in 2021 was only one quarter of the corresponding figure in the 1950s.

Agriculture is identified as a sector with a particular potential to reduce air pollution, using existing technology to curb ammonia emissions. Ammonia, a gas produced mainly from livestock farming, is most harmful because it produces fine particulate matter through chemical reactions in the air.

Whitty said British farmers could reduce ammonia emissions, as their Dutch counterparts have, by changing from the current practice of “broadcast” applications of slurry across fields to spreading it directly in narrow bands.

Analysis and modeling of urban weather in a changing climate- Dr. Robert Bornstein

I Had NO IDEA What Indian Farmers Did, Until…