Our Current Affairs January 2023 events will help you to get more marks in Banking, Insurance, SSC, Railways, UPSC, CLAT and all State Government Exams. Also, try our Latest Current Affairs Quiz and Monthly Current Affairs 2022 PDF which will be a pedestrian to crack your exams. 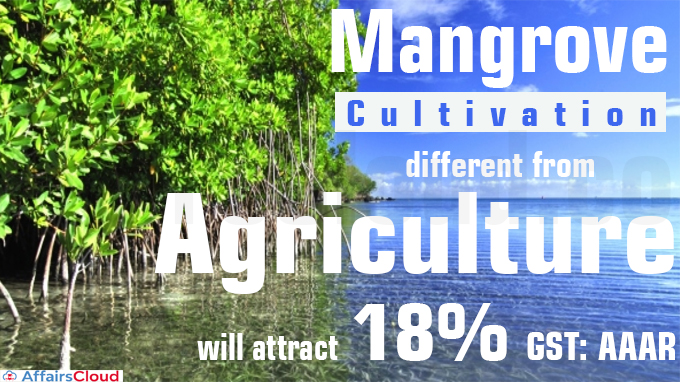 As per the Appellate Authority for Advance Rulings (AAAR), the cultivation of mangroves is different from agriculture and will not be exempted from the Goods and Services Tax (GST). It will attract 18% GST.

What was the case?
The applicant, who is engaged in developing mangrove seeds into seedlings in nurseries with an objective of environmental protection against cyclones and tidal waves, had sought a ruling from the West Bengal AAR that his activities be exempted from GST.

Therefore his services are not related to the cultivation of plants for food, fiber, fuel, raw material or other similar products. None of the activities carried out by the appellant will be classified under the chapter heading 9986, which covers activities that support agriculture and hence liable for GST. 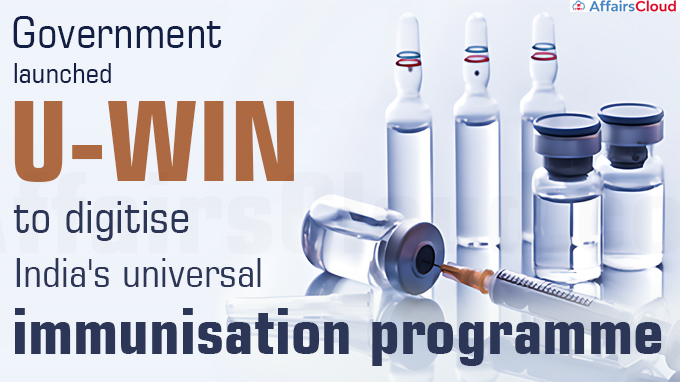 The Government of India (GoI) has launched U-WIN, a platform to digitize India’s Universal Immunization Program (UIP) in a pilot mode in two districts from each State and Union Territory (UT).

i.The U-WIN platform is a replica of Co-WIN, which was introduced in January 2021 in 65 districts and has been the “digital backbone” for India’s COVID-19 immunization programme.
ii.The UIP was first introduced as an ‘Expanded Programme of Immunization’ (EPI) by the Ministry of Health and Family Welfare (MoH&FW) in 1978. 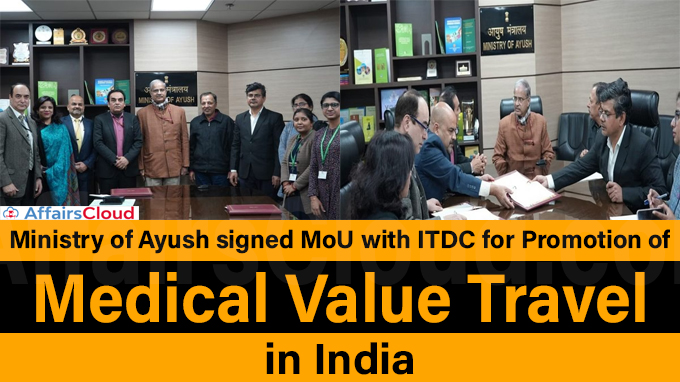 The Ministry of Ayurveda, Yoga and Naturopathy, Unani, Siddha and Homoeopathy (AYUSH) have signed a Memorandum of Understanding (MoU) with the India Tourism Development Corporation (ITDC), Ministry of Tourism to collaborate on the promotion of Medical Value Travel (MVT) in Ayurveda and other traditional medical systems.

Features of the MoU:
i. Under this MoU, the Ministry of AYUSH will train ITDC officials on the MVT in Ayurveda and other traditional systems of medicine.

ii. ITDC, on the suggestion of the AYUSH, will include historical heritage sites of Indian systems of medicine in tourist destinations under “Knowledge Tourism,” and may create films & literature that tourists will find useful.

iii. JWG will identify the best practices adopted by Malaysia, Singapore and Thailand etc. to promote themselves as a preferred MVT destination.
Key Points:
i. G20 delegates discussed opportunities and challenges to promote MVT in India at the First Health Working Group meeting under India’s G20 presidency (on 18th January 2023) in Thiruvananthapuram, Kerala.

The Ministry of Youth Affairs and Sports (MoYAS) has formed an Oversight Committee headed by Khel Ratna Awardee(Boxing) MC Mary Kom, Chairperson of the Athletes Commission of the Indian Olympic Association (IOA), to enquire into the allegations of sexual misconduct, harassment and financial irregularities in the Wrestling Federation of India (WFI), levelled by prominent sportspersons. Key Points:
i.Of the world’s total 74.9 mh under organic farming, Australia has the highest at 35.69 mh followed by Argentina with 4.45 mh , Uruguay with 2.74 MH and India with 2.66 mh.
ii.Out of total 34 lakh organic producers in the world, 16 lakh farmers in India are into certified organic farming.

India’s efforts towards natural farming:
It should be noted that the Union Cabinet is yet to approve the Ministry of Agriculture & Farmers Welfare’s proposal Rs 2,481crore proposal to launch the National Mission on Natural Farming (NMNF). 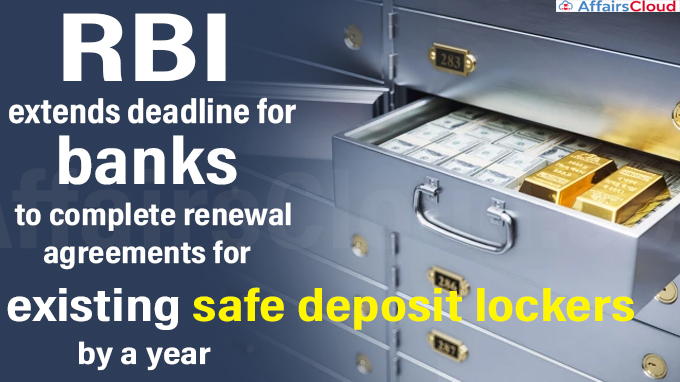 i.On January 23, 2023, the Reserve Bank of India (RBI) extended the deadline for banks to complete the process of renewal of agreements for the existing safe deposit locker holders by December 31, 2023 from January 1, 2023.
ii.Banks have been advised to make necessary arrangements to facilitate the execution of the revised agreements by ensuring the availability of stamp papers, etc.
iii.In cases where operations in lockers have been frozen for non-execution of the agreement by January 1, 2023, the same will be unfrozen with immediate effect.
iv.RBI in exercise of its powers under sections 35A and 36(1)(a) of the Banking Regulation (BR) Act, 1949, directed SBM Bank (India) Ltd to stop all transactions under Liberalized Remittance Scheme (LRS) with immediate effect till further orders.
About Reserve Bank of India (RBI):
i.The Reserve Bank of India was established on April 1, 1935, in accordance with the provisions of the Reserve Bank of India Act, 1934.
ii.The Central Office of the Reserve Bank was initially established in Calcutta but was permanently moved to Mumbai in 1937.
iii.Though originally privately owned, since nationalization in 1949, the Reserve Bank is fully owned by the Government of India.
>> Read Full News 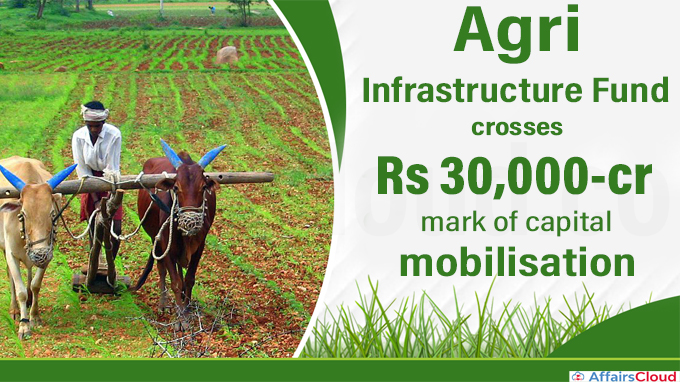 According to the Ministry of Agriculture & Farmers Welfare (MoA&FW), the Agriculture Infrastructure Fund (AIF) has raised more than Rs. 30,000 crore in capital for agricultural infrastructure projects, with a sanctioned amount of Rs. 15,000 crore.

Agriculture Infrastructure Fund (AIF)
i.AIF is a financing facility that was introduced on July 8, 2020, for the creation of post-harvest infrastructure and community farm assets across India.

ii.This scheme would disburse Rs. 1 lakh crore by the fiscal year 2025-26, while interest subvention and credit guarantee support will be provided until 2032-33.

iii.Under the Credit Guarantee Fund Trust for Micro and Small Enterprises (CGTMSE) scheme, eligible borrowers of this financing facility would have access to credit guarantee coverage for loans up to Rs. 2 crore.
iv.There will be a 3% annual interest subsidy on all loans made through this financing facility, up to a maximum of Rs. 2 crore. This subvention will be available for a maximum period of 7 years.
v.It allows for convergence with all schemes of the Union or State government. This new facility for credit card users is similar to mobile number portability which allows to change service provided while retaining the same number.

Key highlights:
i.SwipeUp platform helps customers to upgrade the benefits of credit cards according to their lifestyle. The bank primarily focuses on the customers who hold Credit Cards of any other Bank and can benefit from an upgraded Credit Card matching their current lifestyle.
ii.The credit cardholders of other banks can provide details of their existing credit cards and check their eligibility for upgrading their cards within a few seconds. Housing Development Finance Corp (HDFC) plans to raise at least 30 billion rupees (USD 370.5 million) through the sale of bonds maturing in 10 years. The company has invited bankers and investors to bid for coupons and commitments. The issue will also have a greenshoe option to retain an additional Rs 20 billion and will close for subscription later this week.

OPPO India, a Mobile phone brand, partnered with the Common Service Centre (CSC) Academy, the Education & Corporate social responsibility (CSR) wing of Common Services Centres (CSC) under the Ministry of Electronics and Information Technology (MeitY), Government of India (GoI), for the Cyber Sangini program, 45-day course, to empower rural and semi-urban women by training them in the fundamentals of cybersecurity and cyber wellness..

The Ministry of Skill Development and Entrepreneurship (MSDE) has partnered with Bharat Dynamics Limited (BDL), under the Ministry of Defense (MoD), to create an apprenticeship training framework to address the need for the skilled and future-ready workforce in the Central Public Sector Undertaking and industries. 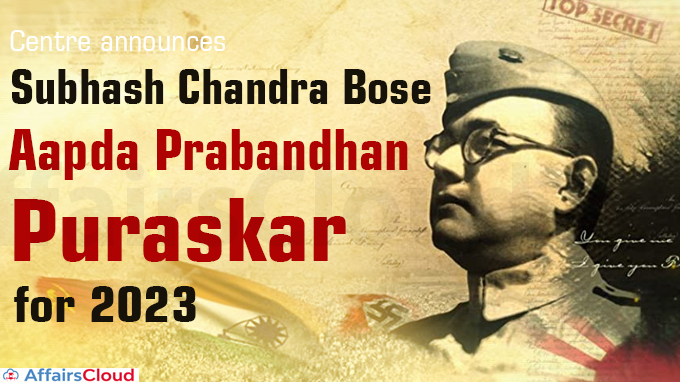 ii. It responded effectively to various cyclones, including Hudhud (2014), Fani (2019), Amphan (2020), and Odisha floods (2020).
iii. It implemented disaster preparedness projects in 381 tsunami-prone villages and wards, as well as 879 multi-purpose cyclone and flood shelters within 1.5 kilometres (Km) of the coastline.
Lunglei Fire Station (LFS), Mizoram:
i. LFS responded quickly and effectively to a massive forest fire that broke out on 24th April 2021 in the uninhabited forest areas surrounding Lunglei town and spread to more than 10 village council areas.
ii. LFS personnel, assisted by local civilians, worked continuously for more than 32 hours, during which they motivated and provided on-the-spot training to residents. 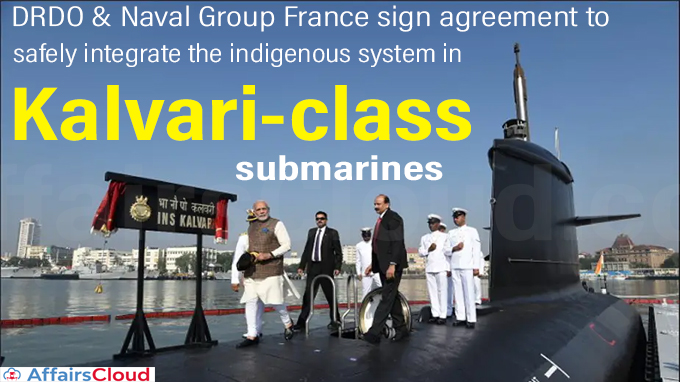 The Defence Research and Development Organization (DRDO) and Naval Group France have signed an agreement that would greatly improve the endurance of the Indian Navy’s Scorpene-class conventional submarines.

Key Points:
i.With this agreement, cooperation will be enhanced to include the design process for integrating indigenous AIP into Kalvari-class submarines.

ii.Naval Group France will certify the AIP design for integration into the submarines as part of the agreement.

Air Independent Propulsion (AIP) System
i.The AIP has a force multiplier impact on the lethality of a diesel-electric submarine since it increases submerged endurance by several folds.
ii.When compared to other technologies, it performs better, and it stands out since the hydrogen is generated onboard.
iii.The land-based prototype has been tested, and the technology has now reached the stage of maturity for industrialization.
History of Scorpene-Class Submarines: Project-75
i.In accordance with a USD 3.75 billion agreement signed in October 2005, six Scorpene submarines are being manufactured by the MDL under ‘Project-75’ with technology transfer from Naval Group France.
ii.The first submarine, “INS Kalvari”, was commissioned in December 2017. 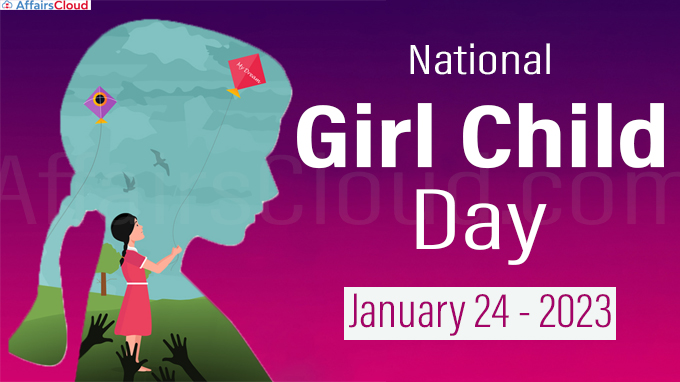 National Girl Child Day (NGCD) is annually observed across India on January 24 to spread public awareness about inequities that girls face in Indian society. The day also promotes awareness about the rights of the girl child.
The day is observed by holding a variety of events to honour girls.
Background:
i. National Girl Child Day was established in 2008 by the Ministry of Women and Child Development (MoWCD).
ii. The 1st ever National Girl Child Day was observed on 24th January 2008.
Note:
Various initiatives and campaigns have been implemented to improve the lives of girls, including Save the Girl Child, Beti Bachao Beti Padhao, subsided or free education for girls, and so on.
Significance:
According to the MoWCD, NGCD is meant to raise awareness about girls’ rights, support the nation’s girl children, eliminate gender biases, and emphasise the importance of education, health, and nutrition.
Event:
The event of National Girl Child Day 2023 is organised by the Department of School Education & Literacy, Ministry of Education (MoE), with the theme “Self Defence Training for Girls”.
Beti Bachao and Beti Padhao (BBBP) Scheme:
i. The MoWCD in collaboration with the Ministry of Human Resource Development (now the Ministry of Education) and the Ministry of Health and Family Welfare initiated the BBBP Scheme.
ii. BBBP scheme was launched by Narendra Modi, India’s Prime Minister (PM) on 22nd January 2015 in Panipat, Haryana.
iii. The objectives of this initiative are United Nations (UN)’s International Day of Education (IDE) is annually observed across the globe on January 24 to celebrate the role of education in peace and development.

The theme of International Day of Education 2023 is “to invest in people, prioritize education”.

AffairsCloud Ebook – Support Us to Grow