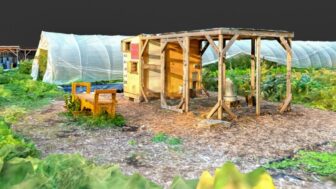 While virtual reality grows in the entertainment world, a team of Cornell researchers is using it to prepare farmworkers for hard work.

“The goal is to approximate the idea of a farm visit, but in situations where the cost of travel is seen as prohibitive or limiting,” Parikh said.

It started as a collaboration with Cornell associate professor of horticulture Jenny Kao-Kniffin to raise awareness about soil health.

“There needs to be a way to disseminate knowledge from farmer to farmer, community to community quickly,” Kao-Kniffin said.

The farm was interested in the project and it was convenient for the team to model, Parikh said.

Cornell hopes to collaborate with other farms to create a variety of virtual reality spaces for people to visit and learn how to farm. The idea is to document and record the various practices used on a successful farm.

The platform will be accessible to the public next year by a virtual reality headset or Oculus Quest and PC, Parikh said.

When people put on the headset, they are placed into the virtual farm. Users can “walk” around the farm and watch instructional videos by the farm managers and workers that illustrate certain practices like composting and growing the crops used on Red Hook Farms, he said.

“It’s also possible to be in the virtual reality space with other people,” Parikh said.

Oculus Quest reports the beginning price for one of its headset is $399.

“Some people may not have them or be able to afford them,” Parikh said.

The team hopes to partner with local schools, libraries and community organizations as a way of increasing access to these headsets, Parikh said.

Even with these advanced technologies, the researchers will never replicate the real farm experience, Parikh said.

Despite the limits, Parikh hopes virtual reality will be useful to teach youths about urban agriculture.  It’s a way to learn about our food system and its origins, he said.

There have been similar educational applications. Ferris State University in Big Rapids, Michigan, has experimented with virtual reality in classrooms for more than 5 years, said Andrew Peterson, the university’s director of E-Learning.

Most of the classes  are focused on heating, ventilation and air conditioning – known as HVAC – or science, technology, engineering and mathematics – STEM, Peterson said.

Although there is little data or evidence that virtual reality really helps students learn, he believes it does, Peterson said.

“The engagement is there.”

Although there are no plans to add agriculture virtual reality to their curriculum, he thinks it would be very useful.

In a VR HVAC environment, students learn how to fix problems like a broken air conditioner in a simulated environment, Peterson said.

“If you can simulate an HVAC environment, in a farming environment there’s so much of it that’s hands-on, and so many people don’t have access to those hands-on environments,” Peterson said.

If you wanted to know agricultural practices in China, with one click of a button you could learn about them with virtual reality, Peterson said. The beauty of virtual reality is how experimental it is.

At Cornell, the goal is for the platform to be used by others to record farm practices like irrigation and harvesting so that one day, users will be able to enter any type of farm and learn different practices, Parikh said.

It can help cities withstand the shocks of the environment like flooding if people better learn how to make them resilient,  Parikh said.

The project is funded by the U.S. Department of Agriculture and a Cornell Tech Urban Tech Hub seed grant.

Parikh’s team hopes with more funding they can release the project early next year.

Urban Gardening for Beginners: Practical Tips to Earn from your Backyard