The food system is at a tipping point. Changing consumer food preferences and eating behaviors are fueling the shift from a commodity-driven supply chain focused on scale to a personalized and value-added food and ag ecosystem. Adapting to this dynamic environment requires us to reimagine a food system where technology enables new collaboration, consumer demand drives production, and sustainability shapes investment decisions.” —from the consulting firm EY.

Whether or not EY had Bowery Farming in mind when it produced that paragraph, the description fits. Bowery Farming is the largest vertical farming company in the United States, an emerging industry that is disrupting the food system to meet changing consumer food preferences, driven by freshness and sustainability. To enable this new approach to farming, Bowery Farming is applying automated storage and retrieval system (AS/RS) technology.

“We’re building the future of food through smart farms and proprietary technology that is simpler, safer and vastly more sustainable than traditional agriculture,” says Justin Frankert, vice president of robotics for hardware and automation. “We’re designing and building smart, controlled-environment farms that use a combination of our proprietary operating system and technology. We’re 100 times more productive while using a fraction of the resources.”

In Bowery Farming’s vertical farms, crops are grown in special palletized trays that are then putaway into a storage location where further technology creates the ideal combination of light, temperature, humidity and water for a particular herb or leafy green. Going vertical uses the cube of the building, rather than horizontal in traditional agriculture, and dense storage is made possible by AS/RS technology.

By going up 40 feet in its warehouse, Bowery Farming gets 30 times the amount of crop from its space compared to traditional farming.

“In outdoor agriculture, you have crop lines and you need space to till,” Frankert says. “We don’t have that problem. Pallets and trays are stacked in the most efficient height in terms of where the crop grows, and then each individual plant has optimized spacing in relation to the closest plant.”

To preserve the freshness of the product shipped to customers like Whole Foods, Walmart and Albertsons, the facilities are located within 400 miles of the markets served; harvested product is packed and shipped within a few days of harvesting. “We don’t hold our crop, which is another way we are disrupting the food supply chain,” says Frankert. “We ship directly from our farms to the customers.”

The application represents a unique combination of a traditional, but effective automated materials handling technology. It uses a pallet-handling AS/RS along with sensors and LED lighting. It demonstrates that just when we think we’ve mined all of the uses for materials handling automation, new possibilities like vertical farming continue to emerge. 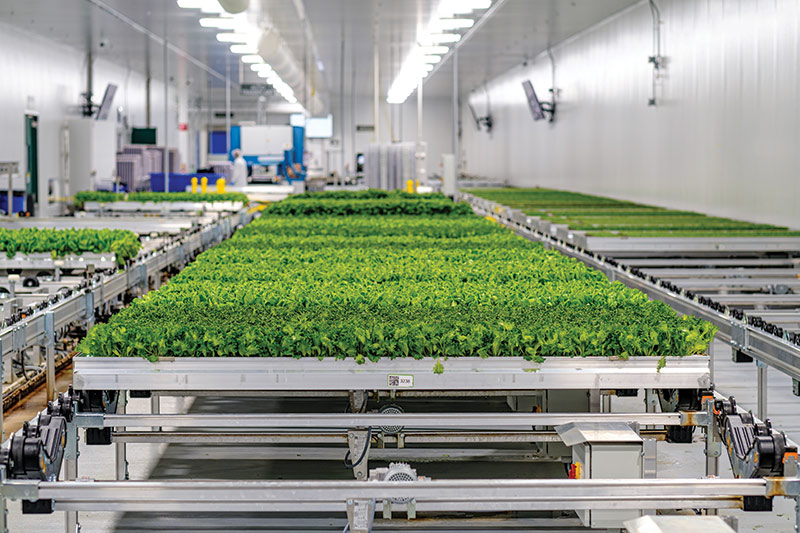 Pallets of plants are moved by conveyor into the main grow area.

Vertical farming can be described as the practice of growing crops in vertically stacked layers, often incorporating controlled-environment agriculture that aims to optimize plant growth and employs soilless farming techniques such as hydroponics, aquaponics and aeroponics. Vertical farms have been installed in structures as diverse as warehouses like those used by Bowery Farming to abandoned mineshafts.

The attraction is simple: As more people move to urban areas, and as cities and suburbs expand into rural areas, less land is available for traditional farming. Vertical farming enables a new source of fresh food, grown in a sustainable manner close to the markets served.

Along with creating a dense growing environment, indoor vertical farming allows the farms to grow all year round—they aren’t impacted by changes in the seasons or weather extremes, such as drought, excessive heat or unexpected freezes.

The concept is often credited to Dickson Despommier, a professor at Columbia University, who, along with his students, in 1999 designed a skyscraper farm that could feed 50,000 people. The idea caught on, even if no one ever built the skyscraper. Vertical farming has been endorsed by the U.S. Department of Agriculture, which notes that funding for research is available through the National Institute for Food and Agriculture. Vertical farming has also attracted investment from the venture capital and private equity communities. Bowery Farming has raised $646.6 million, according to Crunchbase. It’s just one of the companies entering this space globally. 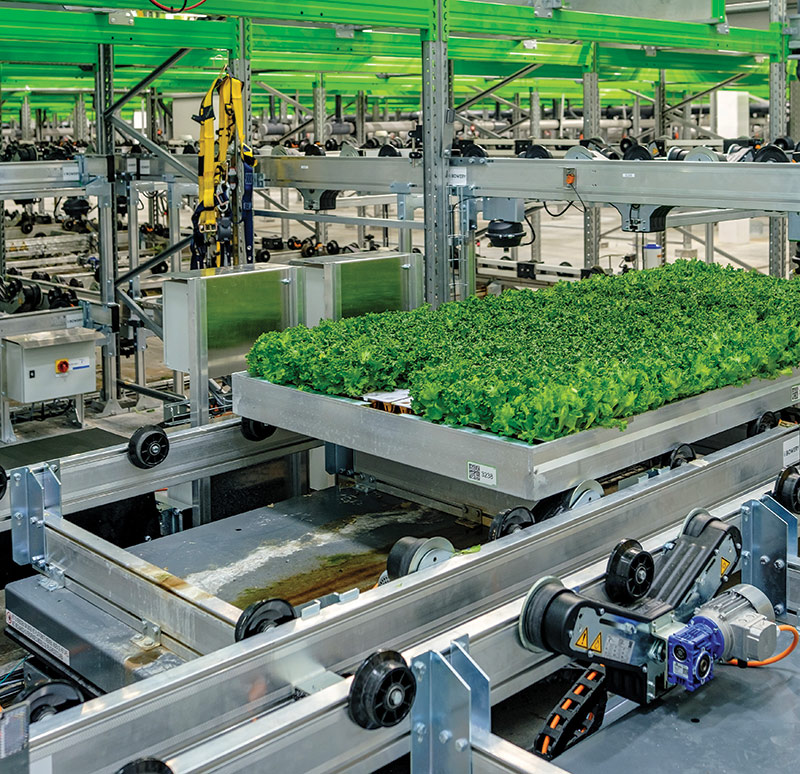 The facility uses a proprietary AS/RS that allows plants to mature under optimal growing conditions.

According to Irving Fain, who co-founded Bowery Farming, the company was launched in 2015 “with a belief that technology and innovation could be a driving force behind re-imagining our food system for the better. Traditional agriculture’s out-sized consumption of natural resources, vulnerability to climate change events and food safety issues, combined with a lack of transparency and understanding, puts enormous pressure on an already strained system.”

Fain describes the company as a modern farming company on a mission to grow food for a better future, one dedicated to reimagining “how we grow our food from the ground up” by harnessing human ingenuity and technology in ways not previously available to farmers. “We are modern farmers,” he adds, “who are creators, builders, problem-solvers and purpose-driven team players, living our mission every day.”

The company is not certified organic; however, no insecticides or pesticides are used to grow crops. “There is a complex technology that enables us to control the lighting, the temperature and the irrigation so that each 4-foot by 8-foot tray can receive its own recipe that might be different from a tray right next to it,” says Frankert. “It’s way different from you and I growing a plant in our windows.”

The backbone for the farming processes inside a Bowery facility is BoweryOS, the company’s proprietary operating system. BoweryOS uses a network of sensors and cameras throughout the “farms” to monitor and collect data about the growing conditions and then make adjustments to optimize the growth of the crops.

“If a tray or area isn’t meeting the recipe established, we can move a tray to a different environment within the AS/RS to hit a higher compliance for the recipe. A lot of local optimization can occur,” Frankert says. In that sense, the lifts and pallet carriers optimize the growing trays like AutoStore bots move totes to optimize access to inventory, although perhaps not as often.

What’s more, the software and technology operating the farm was designed in house and custom built for Bowery Farming, including the AS/RS and conveyor system. To make that happen, the company invested heavily in talent: Frankert, for instance, previously worked at SoftBank Robotics, where he focused on technologies for micro-fulfillment centers in the 7,500 to 10,000 square foot range.

Once plants are ready, they are harvested (top), and sorted and conveyed to packing (middle and bottom).

According to Frankert, who joined the organization two years ago, Bowery Farming realized from the outset that software, technology and automation would be key to its success.

If you look up photos of vertical farming, most of the images show crops being grown on traditional warehouse shelving, not all of it going to the ceiling height of a conventional warehouse. Bowery Farming decided to use as much of the cube as possible with automated storage.

“When they were designing our first farm in New Jersey, they knew we could grow food in a greenhouse,” Frankert says. “The question was could they do it in a dense growing environment, do it at scale and get access to it at harvest.”

The software was created in house, including the Bowery operating system and the warehouse execution system to run the automated materials handling systems. The AS/RS was also designed by the Bowery Farming team and outsourced to machine builders. The AS/RS had to accommodate 4-foot by 8-foot trays and the equipment had to operate in humid and sometimes wet environments. As designed, it includes traditional lifts to get a pallet to the right height and then carriers to deliver it or retrieve it from a storage location.

“None of this equipment existed, so we had to design and test it to confirm it worked,” Frankert says.

When he joined the company, Bowery Farming was operating its first facility in New Jersey and a second facility in Maryland while building its third facility, a 150,000-square-foot facility in Bethlehem, Pa. Bowery Farming operates two other facilities designated as R&D locations, but they also harvest and sell crops from them.

“We call them our R&D facilities, but continuous improvement happens everywhere,” Frankert says. The company has also announced plans for two more facilities in Locust Grove, Georgia, and Arlington, Texas.

According to Frankert, the goal for the third facility was to tweak the systems it was using in New Jersey and Maryland to get even more productivity out of the space. Design changes enabled significant productivity improvements between the first and second facilities, and the goal was to drive even more productivity in the new facility. “We don’t want to just replicate the same farm over and over. We want to make every farm better than the last one,” he says.

To do that, Bowery Farming continued to advance its proprietary operating system. They’ve also made improvements to the design of the AS/RS. Frankert describes it as similar to a traditional unit handling AS/RS, with a vertical lift to get a growing tray to the desired level, and then a carrier that can deliver or retrieve trays from a storage area. One big difference: The system was designed to handle the 4-foot by 8-foot aluminum trays used to grow vegetables and herbs rather than a more traditional 48-inch by 40-inch pallet.

To get more throughput in the new Pennsylvania facility, Bowery Farming addressed several issues. One was to improve the layout. But, beyond that, the teams worked to improve the software, including routing and task management. They also improved the communication links between the system and the software. 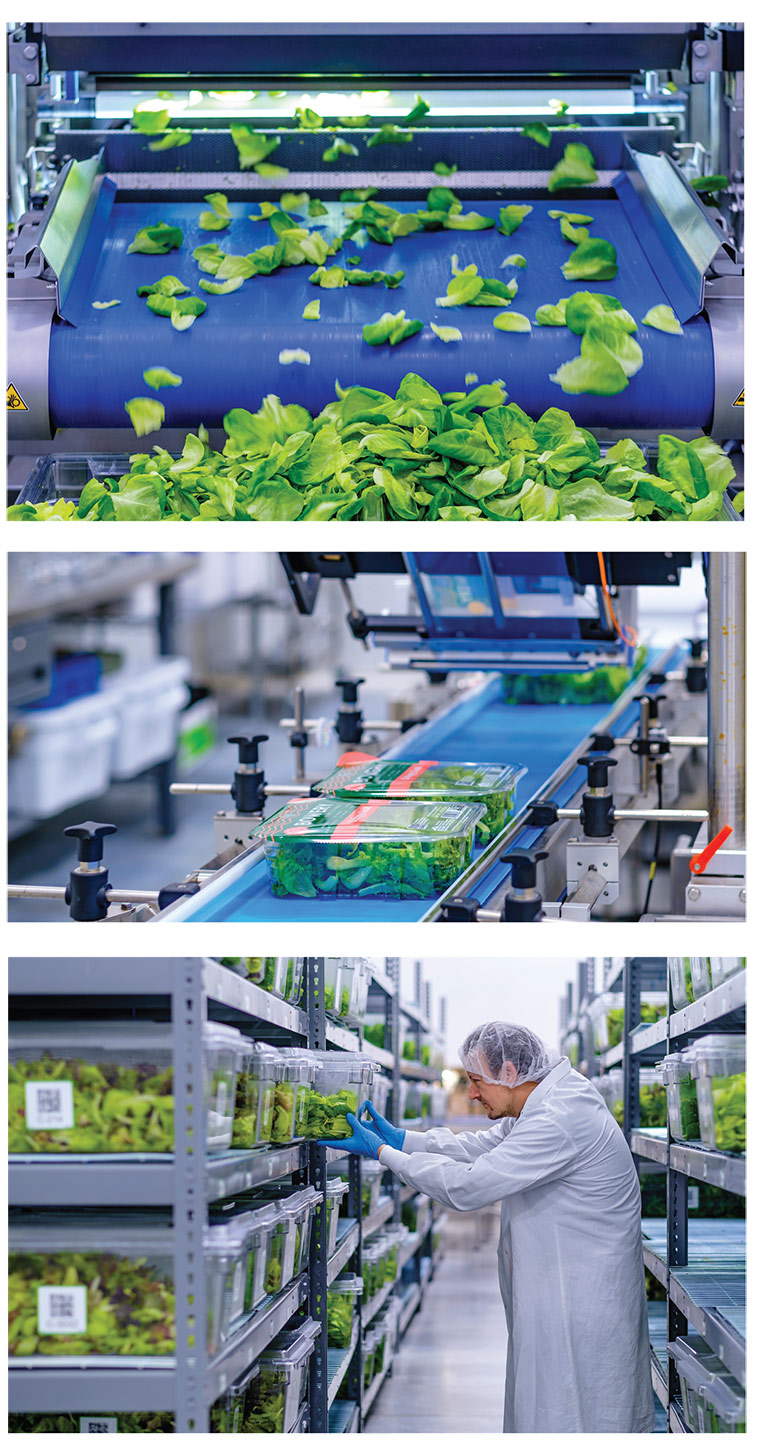 Plants ready for stores enter the packing area where they are automatically packaged for delivery (top and middle). They are then put into a temporary storage area (bottom).

The combination improved the speed of the carriers and the lifts, not only improving productivity, but, Frankert says that between the first and third facility, “the improvements have allowed us to reduce the number of lifts and carriers we need in the system while improving throughput and reducing the cost to build and maintain the systems.”

Frankert estimates that the new facility is getting four to five times the throughput of the second facility in Maryland, and that marked a notable improvement over the first.

As with the advancements that went into the new facility, Frankert says that continuous improvement is part of Bowery Farming’s culture—after all, the company presents itself as a technology company.

“Because we keep advancing in equipment and technology, we can spend more time on challenging tasks for our operators and not just the mundane tasks,” he says, adding, “with every farm we build, we’re getting closer to full automation.”

While the road is long due to the complexity involved in growing and harvesting, Frankert believes they will become a lights out operation, but adds “we want to upskill our people so that they can do more complex jobs, like maintaining the equipment. We call them modern farmers.”

Automation, including materials handling automation, has been critical to the success of Bowery Farming in this emerging industry that combines traditional agriculture and technology. “Without the advancements in software, hardware and automation, it’s just not possible to do this at scale,” Frankert says. 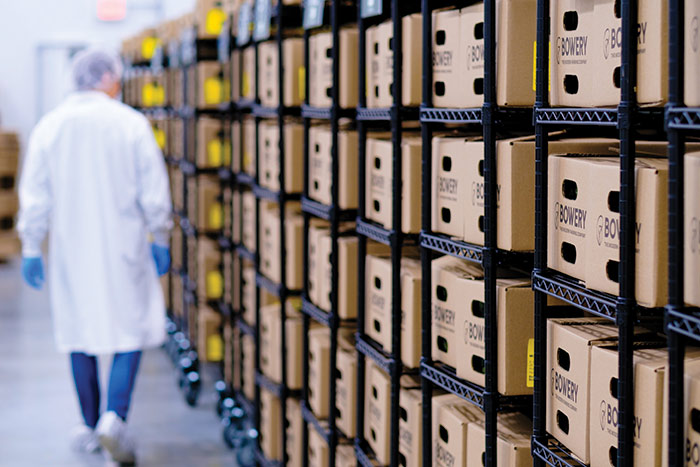 Boxes ready for delivery are staged on carts in the shipping area awaiting pickup.

Cities that feed us: how to create urban farming in…